Rehearsal of Dance Sequences for Molt 1 and 2 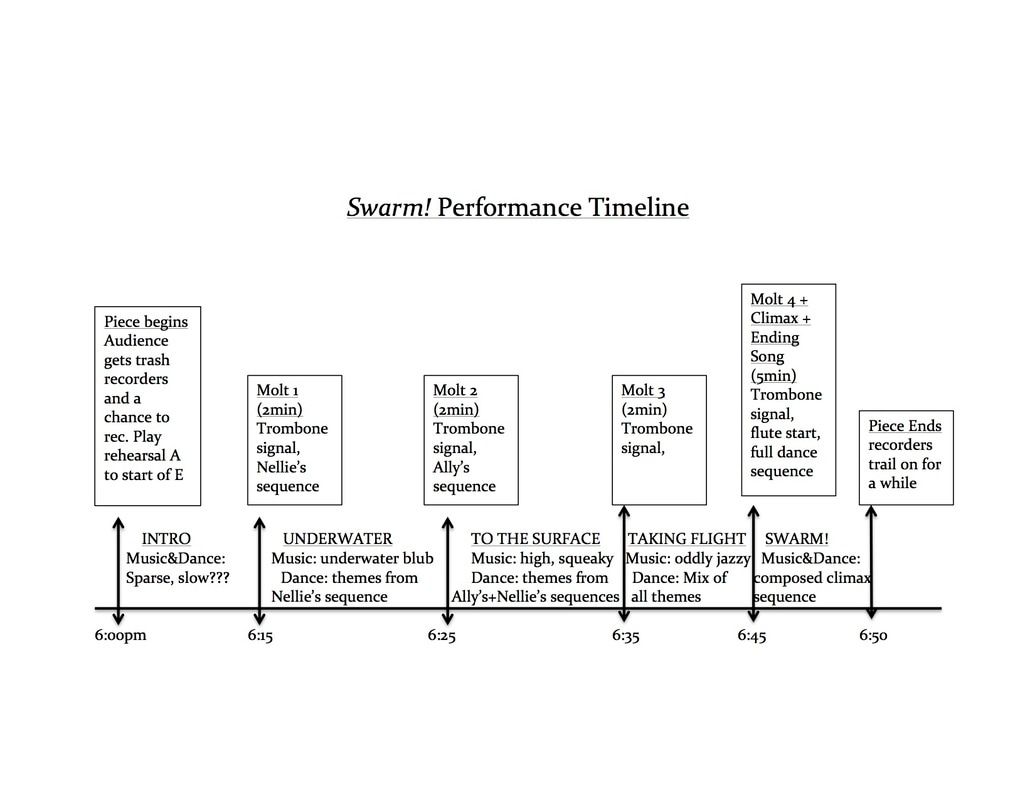 Text for the piece
This text is a series of fragments from poem's by collaborator/friend Clara Weishahn's father, and transcripts from
youtube videos, including documentaries of Mayflies, and local news reports of their swarms.
(all will be credited in the program)
Small chunks of this text will be given to audience members with the trash recorders to record in as source material, spoken or sung by dancers, and sung by musicians at the end of the piece.

[Fragments from poems by Ronald Weishahn]

10 minutes til summer
another 10 til fall
10 more, winter again

Songbird here
Thrush there
Sing solo sounds
absent the entire choral flocks
as if
these soloists ask
what happened?
who turned gray the light?

Below the swollen waters, a swarm quietly brews.
They have just 24 hrs to live, and there’s a lot to do.
The clouds of mayflies can be big enough to show up on Doppler radar.
Then, between 3 and 4 o’clock in the afternoon, their skin splits in half
A new, slightly different creature is born, with only a few hours left to live.
They swarm again, take over the skies, and mate.

THE EPHEMEROPTERA
Mayfly nymphs:
Crawlers, clingers, burrowers, swimmers
The crawlers can live in moderate currents.. and scuttle about the substrate as they search for food.
The freshly molted nymphs are soft and pale.
The burrowing nymphs probe with their tusks for suitable substrate in which to dig their homes.
Giant gills are required to extract oxygen from the confined environment.
Flexible body and streamline profile make for a nearly perfect hydrodynamic form.
Their cryptic coloration hides them from predators.
Many mayflies develop a shiny layer of gas beneath their translucent cuticle [BUBBLE WRAP?]
Finally overwhelmed by buoyancy, these nymphs are stripped from the bottom and floated into the unnatural and dangerous realm of open water.
This transition from the nymph to the adult is know as an emergence.
This sexually immature stage is known as a subimago, or dun phase.
They emerge flat on the surface of the water, with the nymphal shook left trailing on the surface behind the newly emerged dun.
The dun stage is unique among the insect world. No other order of insects has two different stages of winged adulthood.
The dun has no functioning mouth parts and underdeveloped sex organs. The only reason for existing, is to escape.
The final molt brings forth a brand new insect complete with a fresh set of crystal clear wings.
It’s digestive system has been replaced by reproductive organs, and the mayflies can no longer eat or drink.
They all have one final urgent purpose: to breed.
Mating takes place on the wing.
In the mating dance, males fly up and down, females fly horizontally. Using their longer legs, the males snatch a female out of the air and perform a fly-by mating.
These mating swarms can reach suffocating proportions.
As the swarm drops close to the water, it is known as a spinner fall.
For the males, the story ends here.
Carrying anything up to 8000 eggs, she must return to the water.
The female lays spent and dying on the water.

“ Police closed down the bridge for safety”
A prevailing eastern wind is blowing the insects further inland.

Some would say it’s, like, biblical.
You wanna keep yer mouth shut and kinda cover your nose.